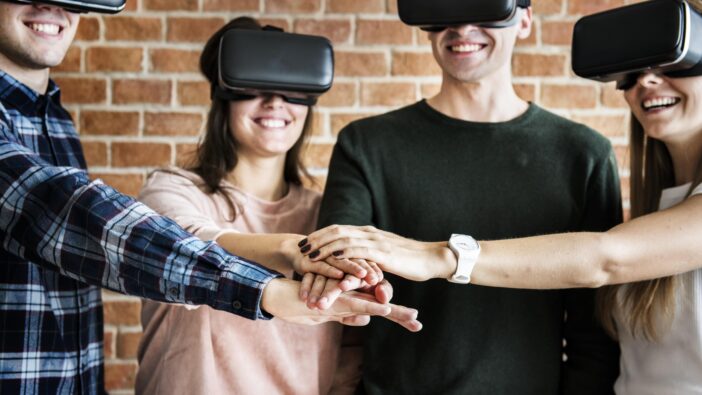 VR, New Technologies, And The Future Of Group Gaming

Human beings have enjoyed multiplayer games for thousands of years, so it’s no surprise that we’ve taken that experience into the digital realm.

At Omescape London, we’re best known for our thrilling escape rooms – but it’s our VR games offering that really taps into the future of group gaming.

Let’s explore what new technologies could mean for the future of multiplayer games.

Thanks to advancements in technology over the past few years, gaming is becoming more and more social. According to Techjury, 56% of the most frequent gamers surveyed spend an average of 7 hours per week playing multiplayer games online. Of them, 55% said that gaming was one of the ways in which they connected with their friends.

The attraction of the group gaming experience is obvious when you consider how massive multiplayer games such as World of Warcraft and League of Legends attract millions of players from around the world.

The appeal of gaming with social aspects also was highlighted in a big way when the ground-breaking augmented reality (AR) Pokémon Go was released in 2016. Media outlets of all kinds were abuzz with the news of an AR mobile game bringing people of all ages together indoors and outdoors in what fast became a global phenomenon.

Using AR, the game brought Pokémon characters into the real world by superimposing them on players’ immediate surroundings. Players caught Pokémon by themselves, and many collaborated with other players to catch more of the characters. The world hadn’t seen anything quite like it.

Unlike AR games that use technology to project fantasy onto reality, virtual reality (VR) games transport players into a fantasy world. One great example of VR gaming in action is the popular Star Wars: Jedi Challenges.

A mask and a lightsaber controller enable players to enter the world of the science fiction franchise. Whatever the game being played, VR means 360-degree views and almost the total immersion of the senses in a virtual world. In multiplayer or group game settings, this includes encountering and interacting with other players’ avatars.

Omescape London’s Arizona Sunshine LBVR, Huxley and its sequel, and Mind Horror also are fine examples of VR gaming. Our virtual escape rooms can place you in the midst of a zombie attack where you and other players can shoot undead villains, in a post-apocalyptic world in which you and other players must combine knowledge and problem-solving skills to survive, into a 19th century steampunk world, and even into the mind of a dangerous criminal.

We predict an array of VR gaming equipment will become available. In addition to headsets, goggles and earphones, wrist controllers, gun controllers, and golf club controllers, as well as VR arcade setups, we may see more affordable consoles or home-based VR offerings that introduce elements such as spraying water, fans that simulate a gentle breeze, and fragrance oils. There already has been some movement in that area, thanks to the work of Feelreal.

Good quality gaming is becoming more accessible, and the trend is set to continue. The way in which games are created, distributed, and played is changing thanks to widespread cloud adoption, which has sped up time-to-market.

Players’ locations are less of an issue when acquiring games, purchasing add-ons and expansion packs, and other elements if they have a reliable internet connection. With cloud gaming, content execution happens in the cloud, while traditional console gaming sees it happen in the console.

Players stream games in the same way as you stream videos on Netflix or another service. However, unlike Netflix movies, the compressed video frames of the games respond to your input. Whenever you press a key, the input travels to a remote cloud server that responds by sending another video frame.

The process happens almost instantly. This means cloud gaming already looks as sleek and smooth as console gaming or games that you downloaded onto a device.

A good example of cloud gaming launched in October 2020, when Amazon introduced its Luna cloud gaming service. The service offers players the option of a local gamepad controller that reduces input lag with a separate Wi-Fi connection.

Another example is Microsoft’s move from Xbox consoles to the Xbox Cloud Gaming services and their virtual Xbox boards. The boards are run in server farms, and they offer a gaming experience similar to what players would enjoy with a native Xbox console at home. The brand’s upgraded hardware improved framerates and load times, optimised games, and streaming support for devices with large screens.

Looking at the future, we see bigger and better clouds on the horizon. Between more affordable VR equipment and the expansion of cloud gaming, the group gaming escape experience will no longer be limited to a physical escape room.

You will be able to join colleagues from work, friends, or family members around the world in immersive virtual environments, where you’ll search for clues, defeat enemy agents, and solve challenging puzzles to beat the game and gain your freedom.

Until those advancements are realised, VR escape rooms for groups are available at Omescape London. Offline escape rooms are already packed with action and thrills, and our VR offering, created in collaboration with a leading VR developer, adds even more to the experience.

Whereas our offline escape rooms put the emphasis on finding clues and solving puzzles, our VR group games encourage participation of a different kind. Players are kitted out with headsets, controllers, and other equipment, all of which is explained before the game begins.

The challenges in our VR escape games get players ducking and dodging virtual missiles, flying, and shooting murderous zombies as a heart-racing storyline unfolds. They’re all about teamwork and thinking quickly. The only downside currently is that you and your team need to be present physically in the room.

The future of group gaming will see the experience move beyond the four walls of our escape rooms. If you have access to the right equipment and a good internet connection at home, wherever home happens to be, you will be able to join others from around the world in the same virtual location.

Little To No Lag

According to electronics giant Samsung, multiplayer games online are the world’s most popular gaming segment. Game lag is one of the greatest challenges for millions of players who enjoy those games, but that soon may be a thing of the past, thanks to 5G.

Game lag is when the server’s response to player action is delayed. Understandably, lag is a source of frustration. However, 5G latency is much lower than 4G with sub-10-millisecond speeds. The result is enhanced game performance and less jitter and packet loss.

In addition to improving speed and performance, 5G technology can support more concurrent device connections than 4G can. A CIO article claimed that, whereas 4G can support 2,000 devices connected concurrently per .38 square miles, 5G can support as many as 1 million connected devices in an area of the same size. With 5G, more players, especially those in heavily populated urban areas, can access cloud gaming services.

Although VR and other new technologies still have a way to go before we see massive changes in group gaming and the escape room experience, the potential is significant.

The future could see the launch of a global escape tournament that is not limited to small groups of friends or co-workers.

Instead, you might find yourself facing down a zombie attack in the virtual company of strangers from around the world.

The future of group gaming looks like it’s going to be an exciting place. That said, there are a few challenges that need to be overcome before we get there.

Accessibility and connectivity are two of those challenges. As promising as cloud gaming and 5G are, developers still must contend with outdated game architectural design, which restricts the number of players that can connect to game engines to prevent servers from crashing. This is one of the reasons virtual worlds haven’t yet replaced comparatively boring social media platforms such as Facebook, Instagram, YouTube, and Twitter.

The cost of AR and VR gaming is another challenge that must be overcome before the true potential of group gaming escape experiences is realised. For example, HTC Vive Virtual Reality headsets cost several hundred pounds, as do the Oculus Rift + Touch – and those are relatively affordable sets, compared to other VR systems.

For now, the cost involved in setting up a VR system at home is beyond the reach of most average consumers, but that is likely to change.

Until the future of VR group gaming arrives in a way that puts it in easy reach of millions of more players around the world, you can enjoy the escape experience with friends and colleagues at Omescape London.

Get in touch with us for more information.