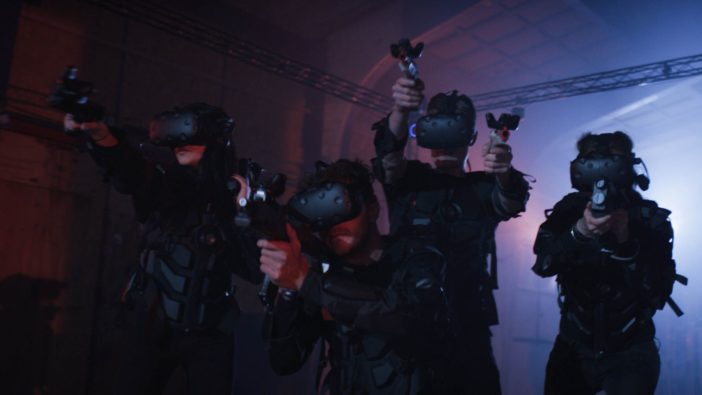 Technology continues to change the way we enjoy group activities. This is especially obvious with virtual reality (VR) and augmented reality (AR) entering the entertainment arena. These technologies can take players into a virtual world, and they bring elements of other worlds into this one. As can be expected, both are excellent options for group activities.

You might be wondering which of the two is more suitable for the group activities you have in mind. The answer to that question depends on various factors.

VR activities involve hardware such as headsets with visors and earphones, and motion controllers that are worn on the arms, or are handheld. Switched off, the headsets are like blindfolds. Switch them on and launch the game, and players see a virtual landscape they can move through and interact with. The virtual reality completely replaces players’ actual surroundings for the duration of the experience.

When it comes to group activities, VR certainly has great applications. The technology offers seemingly unlimited possibilities, whether you consider virtual locations, missions to complete, or puzzles to solve. The drawback is that some activities, such as the VR escape rooms at Omescape London, are limited to a relatively small number of players. Our options are for 2 to 4 or 2 to 6 players.

AR took the spotlight on the global stage in 2016, when Nintendo launched Pokémon Go. The downloadable app gave players a new view of the world by superimposing various characters on their immediate surroundings via the built-in camera. But AR isn’t limited to mobile devices, of course.

Other technology includes smart glasses that superimpose images over whatever you look at. The big difference between AR and VR is that the former is all about integrating a virtual world with the real one, and the latter is all about full visual and auditory immersion in a virtual world. Even though AR is less immersive than VR, it has almost endless possibilities.

In terms of group activities, AR has much to offer. We saw this with Pokémon Go, even though the game was focused more on individual players rather than groups.

One reason AR is a good choice for group activities is because it is widely available on smartphones. When it comes to technology other than smartphones and apps, the smart glasses generally are more affordable and less bulky than the equipment needed for VR games. This means larger groups can participate in AR activities with greater ease and at less cost.

Your choice depends on the type of experience you want the group to enjoy, as well as on the availability and cost of the activities.

If you’re looking for full immersion with a strong gaming aspect and movie-like narratives, VR could be the choice for your group. If you would prefer to give players an experience that’s based partly in the real world, and that is easier for inexperienced players to get to grips with, choose AR.