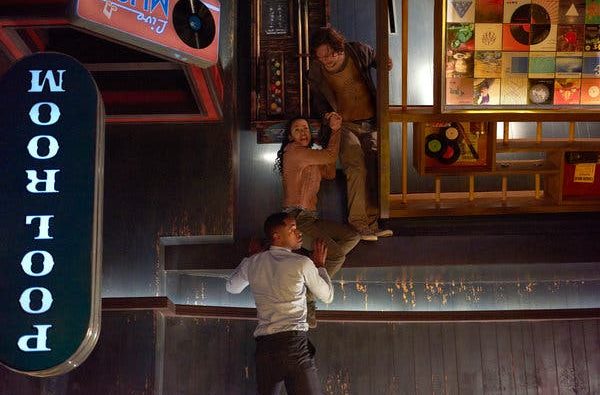 Escape rooms have been growing in popularity over the past few years, cropping up around the world to bring puzzle-based fun to almost every city. It’s no surprise – people love to play detective and that extra time challenge only adds to the thrill!

If you’re a lover of escape rooms, we can help you get an extra kick with these movies and TV shows which feature the riddle-filled rooms.

Hit US comedy Brooklyn Nine-Nine featured an escape room in season 3, episode 14. In the episode, the Captain of the police precinct has decided to take everyone on a fun team-building exercise and has picked an escape room as his activity of choice (a wise decision!). But, his often distracted assistant has forgotten to tell the rest of the team and they’ve all got plans – except the two worst detectives, who rarely do any actual police work. So, with an odd team of the Captain, the assistant, and the two detectives, the team set off to complete an escape room. Check out the episode to see if they manage to get out!

In this film, eight candidates are trying to win a highly sought after position in a workplace, and the way they can secure it is pretty bizarre. Locked in a room, they have to take an exam that asks them to answer a question before the clock runs out. But there’s a twist; they don’t even know what the question is!

With less horror than most escape room movies and a focus on puzzles, this is great for those of you who love the mystery aspect of escape rooms. It’ll certainly have you wondering what’s going on, especially as you realise the company where they’re all trying to work may have more secrets than the room itself. Intrigued? We thought you would be!

If you love horror almost as much as you love escape rooms, this film released in 2019 is certain to be a hit! Escape Room involves people from all sorts of backgrounds, including a successful businessman and a struggling student, all of whom are invited to a mysterious escape room via post with the chance to win a very appealing $1 million if they get out. But, as they enter the rooms and begin to play, they realise the stakes are higher than they first thought.

The rooms are deadly, and if they can’t escape they’re going to die. As they move deeper in, they realise the rooms are based on their own lives too, and whoever’s behind this horrific game is more sadistic than they could’ve imagined. Get ready to be on the edge of your seat whilst you watch this!

Escape room TV tends to be a little more lighthearted than the movies, and if you prefer comedy TV shows you should definitely check out Portlandia. In season 8, episode 3, Kath and Dave try out an escape room – but they’re probably taking things a little bit too seriously. Before they go in, they’ve decked themselves out in survival gear to help them get through the game, which definitely isn’t necessary! Once in, their intensity doesn’t slow, and they team up with two strangers after the friends they were meant to going in with cancel for a hilarious episode. Get ready for lots of laughs!

Released in 1997, this thriller film precedes the arrival of escape rooms, but the concept is pretty similar. There’s puzzle-solving, teamwork, and a whole lot of tension – but these stakes are a bit higher than beating a clock! The story follows a group of 6 people who wake up in a cube with absolutely no memories; they have no idea what they’re doing there or why. Not only are they very confused, the cube is also full of pretty gruesome traps (be prepared for a lot of gore) and if they don’t work out what’s going on and the puzzles of the cube they’re never going to get out. For plenty of twists, suspense, and puzzles, go and give this movie a watch!

If you love escape rooms, you’ll know there’s nothing better than getting up and doing one yourself – even if these are great movies and TV shows! If you fancy some puzzle-solving, why not check at the rooms at Omescape? With fun themes, plenty of riddles, and great sets, you’ll be sure to have much more fun than most of the characters we’ve just spoken about. Don’t worry, there won’t be any fatal traps in these rooms!