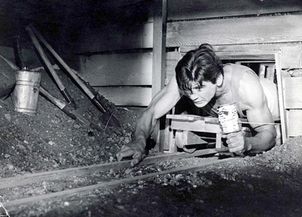 Escape rooms are about as close to what most of us can get to the pressure and adrenaline felt by some of the world’s most notorious escapees. Escape rooms give you just a tiny taste of what it may have been like to really escape from somewhere, with life and limbs hanging in the balance!

Of course escape rooms put you in no danger or threat (it’s all an illusion) and the only real pressure is running out of time or failing to solve the puzzles – but I bet you’ve often wondered what the most daring real escape have been throughout history.

This famous prison escape is one often discussed, especially when the daring nature of it is discovered.  Pat Reid and Airey Neave escaped from Colditz, and Neave’s escape from the prison was made by wearing one of the German Uniforms (worn by the guards). He simply marched out and nobody noticed.

We’re not talking about the film here, we’re referring to the actual escape that took place (on which the was based). It happened in January 1943, when Roger Bushell created a plan to help multiple inmates escape from the prison camp They dug three tunnels over time (the nickname they gave the tunnels were tom, dick and harry) and it took almost 5 months to complete the digging and prepare for the escape. Unfortunately when the time came to escape, even though almost 7- people managed to escape, the majority were later caught.

Alcatraz is probably one of the most famous prisons across the globe – and although it’s not a functioning prison anymore (it’s actually a museum now!) it’s still a formiddle sight if you visit. Although there are no ‘confirmed’ escapes from ALcatraz, many people believe that Frank Morris and the Anglin brothers did manage to escape the walls of this island prison – by using an air vent and burrowing out of their cells. Lots of officials have looked into the escape, and lots believe that the prisoners likely drowned in the ocean when making the crossing to the mainland – however there is still widespread belief that the three did make it, and went into hiding.

Most prison escapes are done in top secret, quiet in the dead of night. It’s all about being as secretive and as quiet as possible. However, with the Maze escape (or breakout as it’s more accurately referred to) the prisoners were loud, violent and dangerous. It happened in 1983, when 38 prisoners (that’s a lot!) escaped from the high-security facility using smuggled guns. One guard was killed, and other were injured, and they managed to escape using a food delivery van.